In The Eons-Lost Orphan sequel Jane Kuznetsov gets a rare direct promotion to captain after she graduates from the USAF Academy. (Usually graduates are commissioned as second lieutenants but the rules allow “extraordinary promotions in the national interest.”)

She also finagles an assignment to the US Air Force Space Command, renamed The Space Force a few years earlier. She is stationed at NASA’s Jet Propulsion Laboratory in her own office and lab facilities atop one of JPL’s buildings.

She is soon joined by a staff of four friends from the Academy. The first job she assigns herself and them to do is detailed research in telemagnetic floater technology, to be published in the USAF tech journal. This will allow aircraft to take off from almost any flat space rather than huge and expensive runways. This is vital to ground support aircraft that do emergency evacuations, reconnaissance, and ground attacks.

They create a succession of test vehicles using cheap off-the-shelf items and 3D printers. Here they are.

Like magnetic forces repel each other, so  the blue housing and everything else rises above the surface. Tilt the inducers backward to make the vehicle go forward. Tilt them forward to make it go backward. (Or slow down if it is moving forward.) 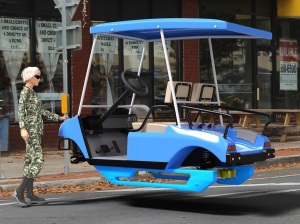