How the first Mary McCarthy book came to be

The beginning of Shapechanger’s Birth came to me as a semi-dream deep in the night while I was still working for Boeing Aerospace. I was in Montreal during the week of their first snowfall to get detailed information from a French company which had an engineering product that Boeing wanted to use.

I woke to darkness tightly wrapped in…something. I was…a fifty-something woman…in western Ireland…in 1854? I explored my wrapping with my fingers in their cramped position below my breasts. It had a weave I recognized.

It was my death shroud.

At that revelation I came fully awake. I sat up in bed, got out of it, went to the bathroom briefly, and went to the hotel room desk where my laptop rested. I quickly wrote down my dream. Freed of the burden of memory I returned to my bed and sleep.

Montreal that week was conducive to imagination and to a feeling of being outside of time. The snow came down gently but steadily, clothing the city in white. Everything was faded up to thirty feet, almost invisible to fifty, totally absent past that. Sounds were muffled close to, silenced beyond.  The downtown was undergoing a massive refurbishment, with several of the skyscrapers little more than skeletons. I seemed to be walking through a far-future city devastated by time or war or both. Or a far-past city in another dimension where magic reigned.

The city I was anchored in was itself drenched in strangeness. At a Mexican restaurant the waiters and customers and a wandering band in sombreros all spoke French. So did the young black women at a large round table celebrating something.

Midweek in the evening I went to a dance studio where we all danced authentic Argentine tango, a popular dance in Canada. I shopped for a few necessities in Montreal downtown’s below-ground corridors filled with restaurants and shops and two or three multilevel department stores. It reminded me very much of future cities under the surface of the Moon or Mars or some planet further away.

I wrote till sleep defeated my efforts. I followed peasant Mary McCarthy reborn as a near-skeletal thirteen year old girl as she struggled out of her grave. I followed her in darkness as she stole from her home some clothing and food. I followed her as she set off down the Irish coast toward the small town of Kilrush on the River Shannon as it flowed toward the sea.

When I flew back to Los Angeles I had the first short story of what was to become the first chapter of the first book in the Shapechanger Tales series. And now you have that book: Shapechanger’s Birth.

(Click image to read the first few chapters and to get it.) 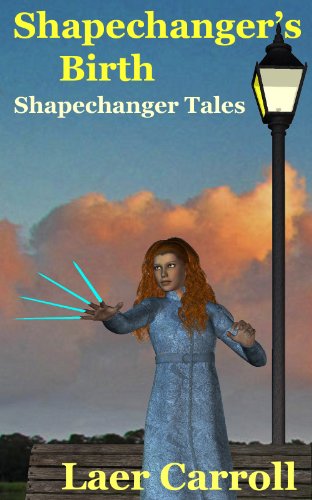