Rising Tension Stories and Their Variations

One model is the rising tension idea which goes back as far as Aristotle.  He stated it in his Poetics.  He felt that a compelling play must contain rising tension until it reaches a climax and (as with an orgasm!) the tension rapidly decreases to a rest state.  Aristotle called this catharsis.

This idea was restated by playwright and novelist Gustav Freytag in 1863.  It is often shown as a pyramid. 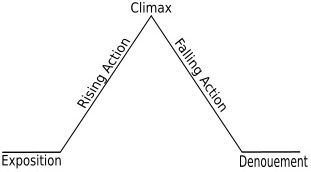 The pyramid as shown above is misleading.  The diagram below is closer to the way most plays which use this model proceed.  Here the tension rises slower and falls off faster.

In this dramatic model the first act of a play or novel begins with the main character in equilibrium.  Her life is in balance, maybe a happy one, maybe a sad one.  But she sees no way to break out of it.  This is sometimes called the prequel, backstory, or prologue.

At the end of act one an “inciting incident” happens.  It brings information which disturbs her view of her situation.  A long-lost love returns to her neighborhood or an invading army approaches.

At the beginning of act two she decides to do something, perhaps approach her old flame, or run from the invaders.  She begins a series of actions to accomplish this goal, defeating or avoiding obstacles in her path.  The reader, living her life at second-hand, feels tension.  In a compelling play or novel this tension must rise continuously (says the model).

Until it can go no higher.  Freytag’s third act includes the climax.  His fourth act includes the falling away of the tension till it hits bottom, which is the resolution.  The fifth act finds her at another equilibrium.  It might have a higher, lower, or the same level of happiness as in the first act. 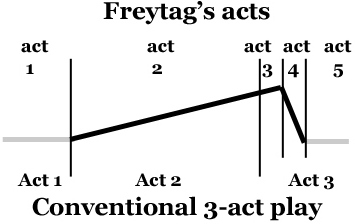 In plays the prequel and the sequel must bookend the spine of the story.  But in prose fiction they may not exist at all and the reader must infer them.  Or they may be very short.  This is shown above by coloring the backstory and afterstory grey, to show that they are conditional.

Or the backstory may be distributed within the spine as needed to make the story understandable and satisfying.

There is another problem with the diagram: the steady climb of the tension.  This may be fine with a short story or short novel, or a stage or screen play.  But not if the story is long and the tension relentless (“action packed”).  Even the most adrenaline-addicted adolescent tires eventually.   When that happens the rising tension felt by readers plateaus or drops off.  The next new fight or chase meant to ratchet up the tension fails.  It is wasted.

Instead writers can provide rest stops on the journey to story’s end.  Shakespeare famously did this with comic relief.  But there are other kinds of relief.  For example, a writer might switch to a subplot which is less tense than the main plot.

There is yet another problem with a simplistic view of Freytag’s model.  It assumes that there is only one kind of tension.  There are several.

One kind is that of thrillers and adventures, the negative emotion of fear for one’s safety.  Tension in a romance may instead include other kinds of fear: of losing one’s identity in a marriage, of not being loved, and so on.  They can also include positive emotions: the excitement of sex, the warmth of love.

In a teen story it might include growing elation as the teen main character gains self-confidence and skill dealing with the world.  In the revenge tale the tension might include pleasurable anticipation of the main character achieving her revenge after laying waste to half a city of bad guys!

Finally, the rising tension theory ignores a simple fact.  Readers need only have ENOUGH tension to keep them hooked on the story.  RISING tension is irrelevant.

Where might we use that format?  One is the road trip, where the journey is more important than the destination.  It may OR MAY NOT have a grand climax followed by a resolution: finding God or spiritual ease or oneself or one’s country.

In the end, of course, none of this means that we should shy away from the steadily-rising tension model.  It does mean we should feel free to use other literary forms such as the level-tension model.

1 Response to Rising Tension Stories and Their Variations