How many basic stories are there? Some have said 36, 9, 22, 101, and several other numbers. In fact there is only one, with infinite variations.

Somewhere, somewhen, someone strives to get something.

Each of the parts of the story effects all of the others. This can be expressed by the following diagram. The lines between parts indicate that each part affects another part, and in turn is affected by that part. 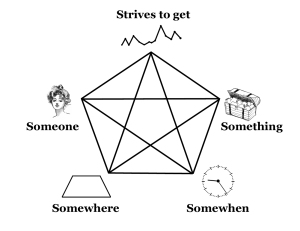 This primal story is an archetype, a skeleton hidden within all stories. It is primal because striving, in ways microscopic to astronomic, is the essence of all life. Every breath we take we struggle against, for instance, the muscles which hold our ribs together. Walking is a struggle against gravity. We strive to live well, or honorably, or even just to live.

The primal nature of stories is why they are all around us, in ways large and small. At water coolers and lunches, at home where children tell their parents why they have not done their homework, in news stories about the strivings of nations. Stories explain, justify, are art works pleasurable in many ways, and give us short vacations from life so that we can return to daily life refreshed and better able to live.

The skeleton or template for all stories has five parts, indicated by the words beginning with an S. Each part is like a blank in a printed or online form. You use the primal story, consciously or subconsciously, to create a new story by filling in the blanks with material you invent. Or you can use the primal story to critique an existing story by filling in each blank with an analysis of that part of the story and how it fits with other parts.

If you are a writer you will do both — create your stories and critique them to make them better. Every writer works differently. Some writers will finish an entire story then critique and fix it. Some will spend much time criticizing as they write.

Many writers will work in a way that falls somewhere in between the two extremes. Lois McMaster Bujold, for instance, begins with an overall idea for her stories but mulls and plans only a few chapters in detail, writes and fixes them, then repeats the process for the next few chapters.

the seed of your story – the settings

Every story starts with an idea which catches your imagination. This inspiration is like a seed from which your story grows. It may be any one of the parts of the primal story, such as its “somewhere” and “somewhen”: the SETTING.

Many settings appeal to the tourist in us, letting us go perhaps to the far future or the distant past. Or to a culture that exists today but is strange to us — though that is a matter of viewpoint. The world of the very rich, or the very poor, or Thailand, or Vermont, will seem exotic to your readers only if they are not part of it.

You may also write of the familiar. It could be of a comforting place and time that you experience or have experienced, one that draws you to its warmth and safety. Or it could be a setting full of fear and pain, perhaps dealing with problems you or your readers want to exorcize by revisiting them.

Some familiar settings may combine comfort and discomfort. Noir detective stories, for instance, often get their power from the contrast between the two. Perhaps two neighborhoods side by side, with evil from the bad neighborhood infecting the good one. Or a neighborhood that seems full of ease and love but has evil hidden in it.

the seed – the protagonist

The seed of your story could be an interesting person, the “someone” or PROTAGONIST of your story. Your main character could be a woman or man, young or old or in between, rich or poor. They could be a magical creature, an orc or elf or ghost or vampire. Or an animal, either a real one or a comic-book character who can talk and is really a human in all but appearance. Or a robot, as long as it has some desires and an ability to strive to satisfy them. Or even a paramecium or a god — though stories about the first would probably be boring, and those about the second too confusing for merely human readers!

Your main character may also be a group. The underdog sports team is a favorite in movies and TV shows. So is the odd-couple partnership, such as the weary expert cop and naïve hotshot rookie. Or a motley band of heroes, such as the one in the Lord of the Rings fantasy trilogy. Perhaps the most popular odd couple is made up of a woman and a man, who don’t know until late in the story that they have a common goal: each other.

The most challenging stories are epics. These have several equally important protagonists. Epics, often told over several books, have stories which often connect only indirectly, as the several stories give, for instance, a kaleidoscopic view of a nation at war, or going through peaceful but difficult transitions.

the seed – the goal

Another kind of seed of your story might be a fascinating GOAL, the “something” of the primal story. A pirate treasure is still exciting for a lot of people, as is a crashed alien spaceship in a distant jungle, or other physical object or objects. But the goal you choose might be an intellectual one, such as the identity of a murderer or a cure for cancer. It could be social, being elected president of the senior class or of a country, or becoming famous or respected by people. Or an emotional goal, such as happiness, spiritual ease, self-respect, or satisfaction at winning a hard-fought goal,.

The goal you choose for your main character might be multiple. One example is winning a prize but without cheating. Another complex goal is found in police procedurals: not only finding out who did a crime, but also finding enough physical evidence to convict the criminal. Multiple goals add multidimensional savor to a story. And when the goals conflict they add to the difficulty of achieving the goals, and thus add to the triumph of success.

the seed – the actions

A seed might be some of the actions or “strife” needed for your protagonists to achieve their goals. For blockbuster adventure movies this usually includes lots of chases and fights. Perhaps you have an idea or three about some action sequences that few if any other writers have thought of. Or a fresh way to portray these actions.

As you plan or write your story you must weave its actions into a PLOT that makes sense of them emotionally and intellectually. A short story has only one action sequence or very few of them. Novels and feature-length screenplays have dozens of sequences. Epics have hundreds of them.

Crucial to creating strife are obstacles between the protagonist and her goal. In a short story there might be only one. In an epic there might be hundreds. An obstacle can be physical, emotional, mental, or social – or some combination. The main character may have to make several attempts before they vanquish an obstacle. They may even fail all attempts and be forced to go around the obstacle, taking an alternate path toward the goal.

filling in the missing parts

Once you are inspired by some aspect of your story you must build its missing parts. You can begin anywhere and build the missing parts in any order and in any way. Chances are as you do you will find something inspiring about each of the five parts of your story and about weaving them together into a complete story.

As you specify each part of your story this will help you decide other parts. The needs and desires of your protagonist will shape the goal or goals they will strive for. Conversely, the goals you pick for your characters will suggest who would seek them.

Knowing your protagonists’ goals will help you decide how they can reach them. A mental goal may not be reachable by physical action. Also, goals often force your characters to adopt other “ancestor” goals.

A string of such goals often encountered in adventures stories is: make a plan, get supplies, build body strength, train with weapons or other tools, travel to one location, then a second, and so on. At each location your main character or team might have to defeat an obstacle.

Settings will shape, allow, and limit characters and their goals and the actions they take. And your characters will change their world in small or even profound ways.

Specify only the most important details of your protagonists, their goals, their actions, and the arenas they act in, especially when you begin your story. The fewer details there are the fewer you will have to eventually change or delete.

Cultivate a spare style. You can always enliven it later. It is much harder to slim down a story than bulk it up.

You never fully appreciate your story until you finish it. Try to set it aside for a time, perhaps starting a new story. Delaying when you rewrite it lets you come back to it with a fresh outlook and thus better able to see what you need to fix.

Once you have a good overall idea of which of the infinite number of possible stories you want to write you must write it. Other essays on this website will help you do that.