I lack any announcements of sci-fi/fantasy news this week, or any other news I want to shout about. Not because there is none, but because I’m lazy.

So I’m starting a new practice. Each week without news I’ll post a YouTube video I came across that just gives me joy. I hope you will enjoy each too.

Oh, and in case you detect videos that have more women than men shaking their booties, that MIGHT clue you in that I’m a cis-gender male.

Here’s a video put to the tune of “Sugar, Sugar“ which you can read about on Wikipedia.

How BLACK WIDOW could come back – version 2

I just received and put up on my wall a photo of Natasha Romanoff as Black Widow. It’s from “Captain America: Civil War.” It’s directly in my line of sight when I lift my gaze from my computer monitor. It gives me a tiny kick to help me continue writing on the final book of the Space Orphan trilogy. (It just passed the two-thirds milestone, incidentally.)

I have another theory about why in “Avengers: Endgame” the BW did not die. She’s a super soldier.

In the comics she was treated with a super-soldier serum or the like, as were some other Russian women such as Yelena Belova (who also worked under the title Black Widow). This is why in the movies Romanoff is seen being super strong, fast, and tough. So tough that when thrown by explosions or enemies across a room against a wall she leaps back to the fight unhurt. Or jumps from great heights to continue a fight. THUS: the fall on the Soul Planet only SEEMED to kill her.

To get your own copy of the 8×10″ photo click this image. 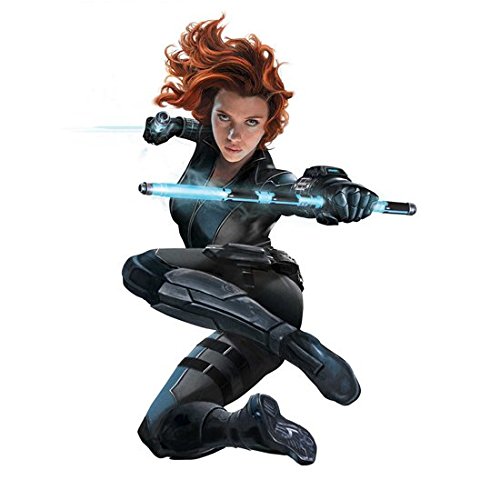 How BLACK WIDOW could come back

At the end of the last Avengers movie several of the Avengers have disappeared, retired, or SEEM to be dead. Among them is Natasha Romanoff: the Black Widow, played by Scarlett Johansson. But in the comics and movies based on comics even death is not final.

We know Natasha will be back in the upcoming Black Widow movie, now shooting and scheduled to premiere in 2020. However it will be an origin story taking place before Avengers: Endgame. If it makes good money there will almost certainly be a post-Endgame movie. How will Marvel bring the Widow back?

To see how they might manage that read this chapter of a book showing how.

Click image to see a larger version of it.

I’m a gun owner and fan from way back. My first gun was a Winchester-like BB gun. The second I got when was I was 17 – a Colt .45 1911 pistol which I customized with Goncala Alves grips. I recently sold it to Gunworld.com as a trade-in on a Glock 19 pistol.

I also carried a pistol as a military policeman, and have experimented with sniper rifles at gun shows. All this and more experience shows up in my books. This includes my Super Olympian books where the heroine is a three-sport Olympic athlete – and a superhuman. And in the forthcoming The Star Woman, whose heroine is a Marine sniper – and another superhuman.

Some of my fellow gun enthusiasts carry our love of guns to silly heights, romancing them, overstating their usefulness, and resisting fanatically any attempt to regulate them. I’m an engineer. I deal in facts. Though I regularly practice at my favorite gun range, firingline.net, there are a few facts that only the fanatics would dispute.

A responsible gun-lover and gun-owner owes it to keeping our right to bear arms to resist both the far-right and the far-left efforts to institute totally free or totally nonfree gun ownership. We can do this by pressuring the NRA to cease its efforts to totally resist RESPONSIBLE gun laws. And to join organizations such as Gun Owners for Responsible Ownership.

Some characters stick in our minds after we’ve finished a story. Such is the case of Athena Sarah Mawusi Akwete Ocampo, the main character in my Athena’s Journey. I’ve been almost forced by my subconscious to write a second novelette about her. Maybe the Ring of Fire Press is a better fit for her stories than the Grantville Gazette.

If you’ve not encountered it, the RoF Press is a treat to explore. Not all the books in their catalog are to my taste, but several of them I really enjoyed. A few of them are below. Click on each image to learn more. 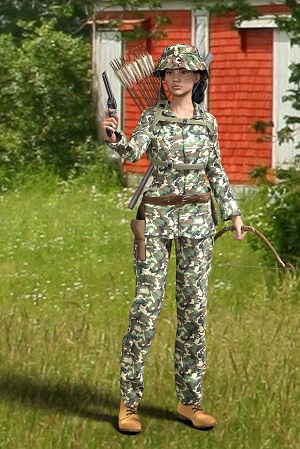 I’m a huge fan of Eric Flint’s 1632 series of books. If you’ve not yet encountered it, I suggest you check out the first book. To read a sample and buy the book, click this image. 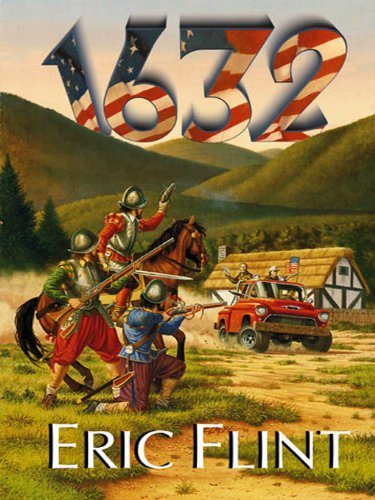 So far the series contains 40+ books and covers the years 1631-1637. It begins when a small city in Virginia in 21st Century America is accidentally sent back in time to Germany in the middle of the Thirty Years’ War. The involuntary emigrants husband their dwindling modern resources to survive. And use their ingenuity to recreate those modern resources to thrive.

The success of the series inspired much fanfic. Some of it was of high quality, good enough to include in an online ebook press called Grantville Gazette. This publishes an anthology every three months and pays writers trade publication rates.

I too committed fanfic: a novella in the 1632 universe titled Athena’s Journey. News of the city from the future would inevitable reach every part of the world. Including West Africa and the port city of El Mina.

Among other ears they reach those of Athena Sarah Mawusi Akwete Ocampo, the three-quarters-white one-quarter-black daughter of a Portuguese merchant. Athena grew up impatient with the European role her father wanted for her and became a legendary warrior. First doubting the stories she hears of the city from the future she comes to half-believe them. And sets out to discover the truth.

I’m an aerospace software and systems engineer, working most recently at NASA’s Jet Propulsion Lab and Boeing’s Phantom Works. I am now retired and spend much of each day writing, mostly fiction.

I am also one of many diverse professionals who study, think, and discuss how to colonize the Moon. Here are some ideas your own engineers may not have suggested to you.

BUILD WITH TELEROBOTS – Drones remotely operated from Earth are most cost effective. “Deaths” among them are not tragic, they need no air or water or food or habitats, they need not be returned home.

BUILD WITH PREFABBED PARTS – Construction on the Moon can be done faster and better by doing the hardest work here on Earth.

USE LOCAL MATERIALS – Lunar rocks and soil contain useful minerals which can be extracted in several ways. These include oxygen and the metals iron, calcium, aluminum, and magnesium.

USE VR/AR HEADSETS – “Vears” are an infant industry slowly ramping up to a big business. Remote operation of drones and viewing of the Moon by long-distance “tourists” is a way to give Earth-bound humans a better way of visiting the Moon.

Putting people on the Moon is a practical near-term goal. Putting them on Mars is not. It’s time to build a moon base, or better a moon city. 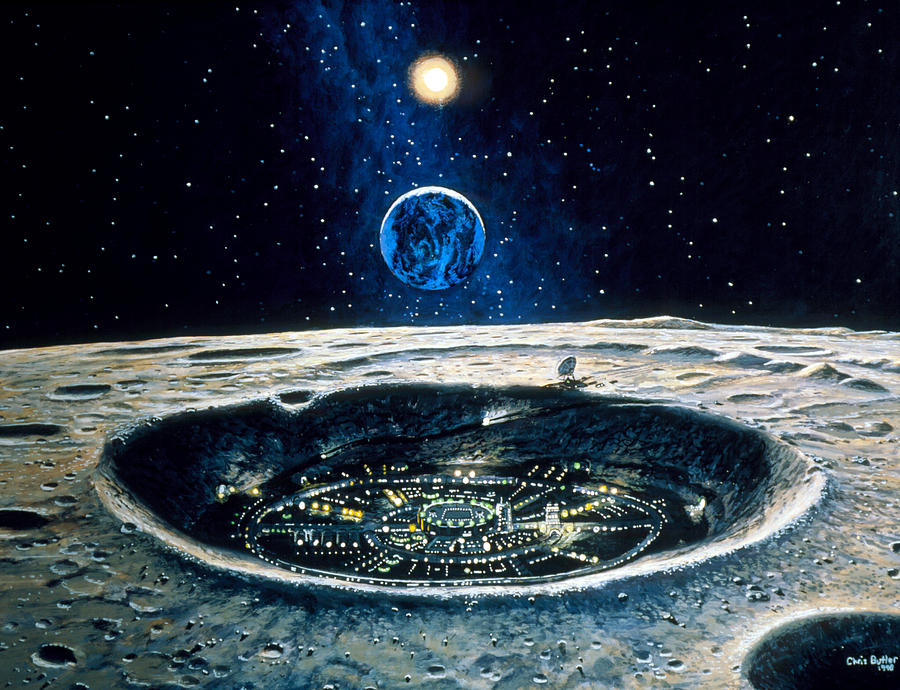 After the base or city is built it would be covered by a thin layer of dirt to protect it from meteorites and extremes of heat and cold. Artwork by Chris Butler, available in several different versions at his web site.

The ORPHAN on the RED CARPET

News from the Orphan sequel front:

At 25 Jane Kuznetsov (the Orphan) has her first boy friend. This is normal for the people where she was born. They lived very long lives and matured much later. They might not marry and have children until they were 50 or 100 years old.

Her boyfriend is a good deal older and a celebrity in the entertainment industry. On occasion he treads various red carpets at such events as movie premieres, awards shows, and such events. Naturally Jane has to have nice outfits for such events. Here is one.

The Shuffle Dance was inspired partly by Michael Jackson’s Moonwalk. It began in Melbourne, Australia, in the ’90s and grew in Asia, including Malaysia, Thailand, Korea, Japan, and especially China. At the same time it was spreading to Europe and more slowly the US.

Here are a couple of videos that show it off. The first is of a Chinese grandfather and his very young daughters. I wish I could dance as well as they do!

The title says it all!